Lessons from Israel to deal with Terrorists 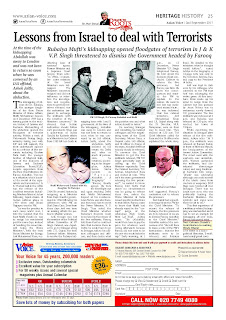 Lessons from Israel to deal with Terrorists

Dr.Hari Desai’s Weekly Column “ Back to Roots” in Asian Voice, the Newsweekly of ABPL Group, London 2 September 2017
Web Link :  http://bit.ly/2vkg2gC
Blog : haridesai.blogspot.com
·         Arif Mohammad Khan says “As was the practice in such cases world over, I told the Cabinet that the least Mufti should do was to resign his ministerial post for some days instead of handling the issue himself being the Home Minister. In 1980s, I remember some relations of the Israel Ministers were kidnapped. The Ministers concerned resigned and did not influence or interfere the investigation and negotiations to get their relatives released nor the authorities bargained to exchange the militants with the relatives of the Ministers concerned.”

·         To convince the Chief Minister to get the five militants released, PM V.P. Singh personally kept on calling up Dr.Abdullah repeatedly. Even the Cabinet Secretary, T.N. Seshan, telephoned CS Moosa Raza and shouted at him. “Why isn’t the state government releasing the five prisoners?”, he wanted to know.
·         Farooq told Delhi that under no circumstances was he going to release those five, unless the Prime Minister of India issued specific instructions to that effect.
·         Farooq came to know that Mufti had already roped in the “corrupt” judge of the Allahabad High Court, Moti Lal Bhat.


·         At 3 p.m., the militants were released at Rajouri Kadal, in front of Mirwaiz Manzil, the headquarters of the Awami Action Committee. The crowd went wild; the euphoria was unmistakable. Women garlanded the militants, and distributed shirni(sugar cubes) and sang traditional Kashmiri folk songs. ‘Diwali’ was celebrated although one could not tell if the blasts came from crackers or weaponry. JKLF flags were hoisted all over Srinagar.
By Dr.Hari Desai Posted at August 31, 2017
Email ThisBlogThis!Share to TwitterShare to FacebookShare to Pinterest